To understand the complexities of Saudi Arabia, a quick course in ‘Riyadhology’ 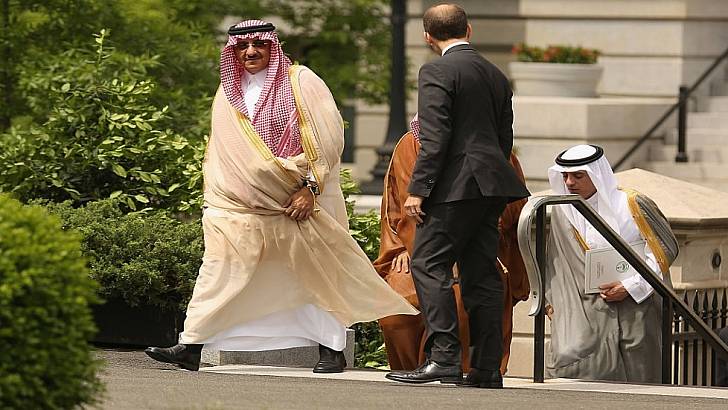 Back in the days of the Soviet Union, foreign analysts used to pay great attention when, on big occasions, the communist leadership lined up on top of Lenin’s tomb in Moscow.

Who was there? And where were they positioned in relation to the party secretary-general? Such speculation was called “Kremlinology.

” For years, I have adopted a similar approach to trying to understand the Saudi royal family, studying the news reports and photographs published by the Saudi Press Agency for the names of who travels with the king, or who is in the receiving line to greet him or say farewell when he travels.

I call it “Riyadhology” and, rather than being some esoteric academic specialization, I believe it is crucial to understanding what is going on in Saudi Arabia.

Also important is a historical knowledge of the Saudi royal family, aka the House of Saud.

It is more than just “bin X” and “bin Y” – “bin” meaning “son of” in Arabic, and often confusingly rendered as “ibn.

” Although the family traces its history back to 1745 when tribal leader Muhammad bin Saud gave refuge to a Islamic preacher, Muhammad bin Abdulwahab, the more relevant date is the founding of the present-day state in 1932.

That year Abdulaziz al-Saud, a great-great-great-grandson of Muhammad bin Saud, declared himself king; after his death in 1953, the throne has passed down his line of sons.

(He fathered 44 boys via 22 wives although, in keeping with Islamic tradition, he only had four wives at any one time.) King Salman, the current Saudi monarch, is a son of Abdulaziz (often known by his historical nickname, Ibn Saud).

Crown Prince Muhammad bin Salman, aka MbS, is one of Salman’s sons. Salman became king because, in terms of age and experience, he was the next best qualified prince in line when his half-brother King Abdullah died in January 2015.

But — and this is where it gets interesting — MbS got his job because he is his father’s favorite. When his father became king, MbS was a mere 29, half the age of some of his own half-brothers.

(He is the oldest son of Salman’s third wife.) Now, apart from being crown prince, MbS is also deputy prime minister, minister of defense and president of the kingdom’s two key decision-making bodies, the Political and Security Council and the Economic and Development Council.

De facto, he IS the ruler of Saudi Arabia. Inexperienced three years ago, his score card so far includes the war in Yemen, the split with Qatar, the attempt to reorganize Lebanese politics, and the kingdom’s economic transformation of Vision 2030.

Of course, whether these can be considered accomplishments is debatable.

“Works in progress” is probably a better term. Will MbS become king when his father, who turns 82 this year, dies? Or will Salman voluntarily abdicate in favor of MbS, or be forced to give up the throne for health reasons? The king has little short-term memory, hence his often puzzled look and his dependence on prompts delivered via discreetly placed iPad screens.

Theoretically, MbS already has the advance endorsement of the House of Saud’s allegiance council of senior princes, but who knows what will happen.

MbS’s brash style has irritated many princely cousins and residual uncles. And his push for modernism — movie theaters, women driving — is probably at odds with the conservative Saudi religious establishment, which would need to declare him as an Islamic leader and an appropriate holder of the title of “Custodian of the Two Holy Places” (Mecca and Medina).

Some people suggest that a future King Muhammad would slim down the House of Saud, ignoring in succession terms his cousins, even his brothers, in favor of his own sons, currently only a few years old. (If he does, one of my prized possessions, a chart of the family tree, more than 13 feet long, will become a historical relic.) But MbS faces a dilemma: Whether as crown prince or as king, he still needs the support of the wider royal family, estimated variously as several thousand strong, to give his own position legitimacy.

He also needs princes as provincial governors and spread through the military to counter potential coups. Eleven peripheral princes found themselves in jail over the weekend after protesting at having suddenly to pay their own electricity bills.

In the name of austerity, MbS may be tempted to also cut back on princely allowances — even the most minor royal gets a stipend from the kingdom’s oil revenues, based on a complicated formula related to size of family and closeness to the line of succession — but tinkering with this arrangement, estimated to cost several billions a year, may have adverse political consequences.

Although claimed as an anti-corruption campaign, the recent enforced stays at the Riyadh Ritz Carlton of a reported more than 200 other princes, businessmen and government officials, are widely seen as a power grab, marginalizing MbS’s adversaries and those who have crossed him in the past.

But it is hard to predict how Saudi Arabia will get from here to there, and whether MbS’s rule will be stable.

“Riyadhology” will remain key to understanding what is happening.