Why Won’t Russia Support the Investigation of Chemical Weapons Attacks in Syria? 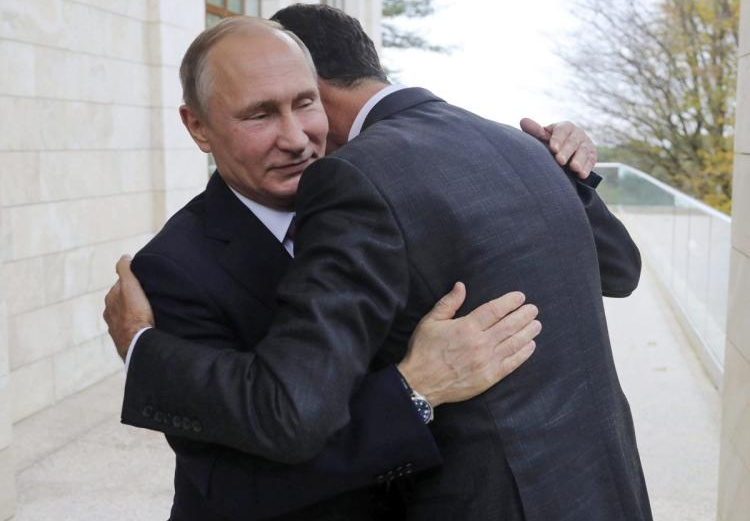 In September 2013, Russia, the US, and Syria accepted a “Framework for Elimination of Syrian Chemical Weapons.” Then, in April 2014, the Fact-Finding Mission of the Organization for the Prohibition of Chemical Weapons (OPCW) was created with the aim of determining possible use of toxic chemicals in Syria. Ultimately, the Joint Investigative Mechanism (JIM) of the OPCW and the UN was established as the centerpiece of the Security Council’s efforts to determine responsibility for the use of CW in Syria. It was founded in August 2015, largely as a result of negotiations between the US and Russia.

The need for ongoing chemical monitoring remains essential in Syria, notwithstanding the seeming defeat of ISIS and the considerable weakening of the rebels. The catch is that as long as no further employment of CW by the Syrian regime is formally confirmed, the latter can claim that it no longer possesses CW. Such stasis is desirable for both the Syrian regime and for Moscow, Assad’s patron and supposedly the responsible adult in the scenario.

Following a recent CW attack by means of chlorine-loaded artillery shells dropped on East Ghouta (January 22, 2018), Secretary of State Tillerson said: “Whoever conducted the attacks, Russia ultimately bears responsibility for the victims in East Ghouta and countless other Syrians targeted with chemical weapons, since Russia became involved in Syria.

There is simply no denying that Russia, by shielding its Syrian ally, has breached its commitments to the US as a framework guarantor.”

In January 2015, the OPCW reported that the destruction of the Syrian CW arsenal had been completed.

But several subsequent chemical attacks showed that assessment to have been mistaken – particularly the employment of the sarin nerve agent by the Syrian Air Force in April 2017.

The uncovering of that event, which prompted the US retaliatory raid on the Shayrat Airfield, was thus a blow for the Assad regime and for Russia, both of which desperately tried to refute the evidence.

The raid showed the existence of a residual Syrian CW arsenal, the extent and locations of which are uncertain. More specifically, at least 2,000 chemical bomb shells that Syria claims it had converted to conventional weapons and either used or destroyed are unaccounted for, suggesting that they may still be in the hands of the Syrian military. The Russians are almost certainly aware (to say the least) of those weapons, as well as of other Syrian CW capacities.

In parallel, renewed production of CW by the Assad regime has been discovered in hidden sections of three sites – Masyaf, Dummar, and Barzeh – with Russian (plus Iranian) informal acknowledgment, and at times concealed support. Cyrillic letters were found on the sarin-loaded 140mm artillery rockets used by the Syrian army in the 2013 massacre; collateral military Russian involvement was traced during the 2017 sarin attack conducted by the Syrian Air Force; a resemblance to a prototype Soviet sarin-loaded KhAB-250 aerial bomb was revealed (if inconclusively); and the hospital where sarin-affected persons were treated was deliberately bombarded.

A critical mass accumulated that led Russia to foil the renewal of the JIM’s mandate. Six draft resolutions were vetoed in 2017 in the Security Council (the most since 1988), with five focused on the use of CW in Syria.

Three consecutive vetoes by Russia resulted in the termination of the JIM at the end of 2017, dismantling what had been one of the rare examples of Security Council action on the Syria file. The Russian representative diplomatically stated that Moscow expected an honest, impartial, complete investigation and would accept clear, incontrovertible evidence of guilt.

Ambassador Matthew Rycroft, UK Permanent Representative to the UN, was unequivocal in his response:

“Make no mistake, the JIM has succeeded; it is Russia that has failed. They have failed in their duties as a permanent member of this Security Council, they have failed as a state party to the Chemical Weapons Convention, they have failed as a supposed supporter of peace in Syria. Russia vetoed a simple technical rollover of the mandate of JIM; a rollover that didn’t judge any party, that didn’t add any conditions … In negotiations, their experts made abundantly clear why they wouldn’t support the JIM’s renewal. Put simply, they cannot, or rather, they will not accept any investigation that attributes blame to their Syrian allies, no matter how robust the investigation, no matter how clear and solid the evidence … Russia once played a responsible role in securing the destruction of much of Syria’s chemical arsenal and in creating the JIM. Regrettably, today the world can see that Russian policy now is to protect the Syrian state, whatever the cost to Russia’s reputation”

The Russian line backing Syria on CW has, in fact, been notably consistent. In January 2014, Russian diplomat Mikhail Ulyanov held that “the Syrians are approaching the fulfillment of their obligations seriously and in good faith.” In June 2013, Alexei Pushkov, chairman of the Russian Duma Committee on International Affairs, maintained that “[i]nformation about the usage of CW by Syrian President Bashar al-Assad is fabricated, same as the lies about the late Iraqi President Saddam Hussein possessing weapons of mass destruction.”

In saying this, Pushkov ignored what had happened ten years earlier on the Syrian-Iraqi border. Former US Deputy Undersecretary of Defense for International Technology Security John Shaw contended that a wide-scale smuggling operation of Iraqi chemical and biological weapons, together with related components, from Iraq to Syria took place in the weeks before the March 2003 US operation in Iraq. He detailed that the Russian “Spetsnaz” (Special Operation Forces) had organized large commercial truck convoys for CBW removal; whatever CBW was not buried in Iraq was put on those trucks and sent to the Syrian border. The goal of the clean-up was “to erase all traces of Russian involvement” in Iraqi CBW programs, and it “was a masterpiece of military camouflage and deception.”

Shaw noted that this type of Russian GRU (military foreign intelligence service) operation, known as “Sarandar,” or “emergency exit,” has long been familiar to US intelligence. Elements of the Spetsnaz and GRU, buffered by a thick layer of polished Russian diplomacy, may now be involved in handling portions of the unconventional weaponry found in Syria, in conjunction with the Syrian regime.

The content of the arrangement in place between Assad and Moscow regarding the policy of retaining – if not recovering – technological and operational CW capabilities is undisclosed. While it is obvious that Assad is unwilling to give up CW, the Russian stance is elusive: it is not clear whether Moscow would prefer Syria to possess or get rid of unconventional weapons.

In September 2017, Russia announced that it had accomplished the destruction of its own entire CW arsenal (which had been the world’s largest). Though this declaration cannot be verified, it implies nonetheless that Russia is seemingly oriented towards chemical disarmament as a fundamental concept. Yet the specific circumstances in Syria, Russia’s cardinal foothold in the Middle East, are unique – foremost in terms of the relationship with Assad.

On the whole, while Russia has played relatively fairly in a number of respects concerning the Syrian crisis, its attitude towards Syria’s CW (as well as towards Iran’s persistent manipulations) is disappointing and hazardous. The consequences might be severe, far beyond what is now apparent.