What is left of the Syrian opposition? 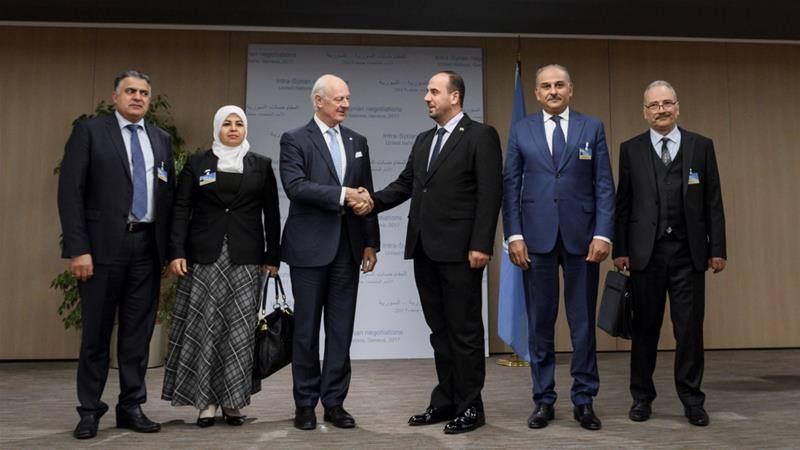 On January 29, Russia will host what it calls the Syrian National Dialogue Congress in Sochi. It claims that this meeting will emphasise the "necessity of a speedy political settlement of the Syrian crisis based on UN Security Council Resolution 2254."

While Russia's current air offensive on the Idlib province is in direct contradiction to the conditions mentioned in Resolution 2254, these Sochi talks are incredibly soul-wrenching for other reasons. They tell us that the international community, even those who claim to be "Friends of Syria", both in the east and the west, are actually friends of Putin, and by association, friends of Bashar al-Assad.

It is nothing new for talks to be held on Syria - over the past almost seven years, there have been talks in Cairo, in Geneva, in Riyadh, in Astana and in Vienna, with the cast of characters varying slightly but maintaining the same characteristics.

The inability of these countless meetings to result in the end of violence against the Syrian people is directly linked to the concerted effort to control, fracture, dilute, manipulate and dismantle the opposition groups that partake in these talks.

On the other hand, and to be completely fair, the opposition groups are not all necessarily dedicated to the same goals and aspirations of the popular movement to remove the Assad regime and push Syria towards a government structure which values freedom and justice.

Civil society organisations and local councils constitute the only opposition that can be counted among those who remain committed to the goals of the revolution. Of course, this strain of the opposition is mostly overlooked and excluded from negotiations.

The other opposition groups linked to Syria, whether attending Russia-sponsored talks or not, have failed to represent the interests of the Syrian people.

Which opposition does Russia want in Sochi?

In November 2017, Iran, Turkey and Russia met in Sochi to pave the way for the upcoming Sochi meeting. More recently, Turkish outlets reported that a 1,600 list of guests had been approved, and Russia claimed it was hoping for UN presence in the form of the UN's Special Envoy to Syria, Staffan de Mistura.

For Russia, however, and for the regime, trying to keep the semblance of an opposition comes in the form of including the so-called "Sochi group" in this newest round of Sochi negotiations. It is not clear to what or to whom exactly these blocs are opposed, since they enjoy the good graces of the Assad regime, Iran and Russia, and are publicly vocal about these alliances.

They include figures such as Qadri Jamil, a former deputy prime minister in Assad's government and the leader of the People's Will Party; Randa Kassis, who started out as a member of the now defunct Syrian National Council (created in 2011 and merged into the National Coalition for Syrian Revolutionary and Opposition Forces - the National Coalition) but is now the president of the Movement of the Pluralistic Society, has met Donald Trump Jr, and supports Russian intervention in Syria; and the "Cairo group" including Ahmed Jerba, president of Syria's Tomorrow Movement, a political party formed in Cairo in March 2016 which enjoys  "good relations with Russia"and has a military wing operating in al-Hasakah, Deir Az Zor and Raqqa provinces that cooperates with the US-backed Syrian Democratic Forces (SDF).

Of course, the regime itself has already confirmed its attendance at Sochi, although it pulled out of the previous parallel Geneva talks that will see their ninth round on January 24-25. Kurdish groups not linked to the Kurdish Democratic Union Party (at Turkey's request because it considers it a terrorist organisation) have also been invited to Sochi.

In case it isn't blindingly obvious, Russia aims to meet two goals with this round of Sochi talks: first, to gather the groups it deems most in line with its vision for Syria in the future, and second, to attempt to show itself as the absolute saviour of Syria given all the other failed attempts to come to a political solution.

Where the rest of the opposition went wrong

Full disclaimer: the criticisms that follow don't apply to the civil society segment of the opposition or the dedicated soldiers who sacrificed their lives and limbs to defend their families against Assad's aggression. Rather, the focus here is on the opposition that has remained mainly external and allowed itself to be manipulated by its backers.

Last week, a four-member delegation representing what is left of the Free Syrian Army (FSA) landed in Washington, DC , hoping to meet the White House to ask for more support in a trip sponsored by the Syrian American Council (SAC). The White House refused the meeting.

To be quite frank, this is the type of behaviour that has made both the political and military opposition weak. Even after the Trump administration has clearly demonstrated its commitment is to its own agenda in Syria, which is a continuation of the Obama-era policy to comply with Russia's agenda in Syria, the Syrian opposition was grovelling itself at the feet of those who are unconcerned with the cause of Syrian freedom, a cause they claim to represent.

Two criticisms have applied to the opposition for a while now. First, externally, the anti-Assad opposition has tethered itself to anti-democratic and counter-revolutionary backers for support and faces an international community that will never correlate its actions with its rhetoric on Syria. A key example is the National Coalition supported by the "Friends of Syria", some of which have been openly counter-revolutionary in their policies and are actively cooperating with Russia and the regime.

While there has been constant pressure over the years on the anti-Assad Syrian opposition to accept Assad as the legitimate ruler of Syria, the latest rounds of Riyadh and Geneva talks have seen an increase in this rhetoric, with so-called neutral negotiators such as Staffan de Mistura, the UN's Special Envoy for Syria, chiding the opposition that they need to realise "they have not won the war".

The second criticism is the opposition's physical and ideological distance from the Syrian people who are suffering most under Russia and the regime: in Syrian circles, the people who attended Geneva and Astana are scoffed at even more than the Sochi group and labelled the "five-star hotel opposition". The image of the president of the Coalition , sporting a large grin and shaking hands with figures such as Russian Forein Minister Sergey Lavrov is difficult to reconcile with the images of homes demolished by fighter jets Russia provided to the Assad regime.

The newly restructured Higher Negotiations Committee (HNC), which was formed from the Coalition and is now known as the Syrian Negotiations Committee, recently met the Russian foreign minister in Moscow. Rather than insisting that negotiations occur on their own turf, the group travelled to get "full and clear information from Russia" on the Syrian political process, giving up any agency they had by previously refusing to attend the farce of negotiations held by aggressors.

Then, with a straight face, the HNC actually had the audacity to announce that it was "boycotting" the Sochi talks, as if they hadn't just been smiling for photos with Lavrov mere days ago. Claiming to boycott talks after getting a debriefing from the aggressors themselves, on their turf, kills any political clout that would have come from not attending Sochi.

Considering these realities, holding any type of political negotiations is a recurring cruel joke being played on Syrians. The opposition's hands are tied, the international community is biased towards Assad and Russia, and the lives of Syrians who are most affected by these decisions are treated as after-thoughts, if even that.

Perhaps most importantly, the very people claiming to represent the revolution haven't consistently stood for the revolution - what they stand for depends on the backer. If anything is to change in the political process, the international community must shift its focus to the one opposition that has remained committed to the revolution: civil society and local governance groups.